Why has Wildberries been in the news?

In January, Russia’s largest ecommerce retailer, Wildberries, began sales in its tenth country of operation, Germany, with immediate plans to enter several other EU countries. German customers can now order via the website or mobile app to access 4m items across 40k brands. Since first announcing European expansion plans in October 2019, Wildberries has built a logistics center in Slovakia and launched in Poland, Slovakia, and Ukraine. In February, Wildberries also announced the purchase of a small Russian bank called Standard-Credit to boost the quality and speed of payments. Ozon, one of Wildberries’ primary rivals, has also been in the news given their Nasdaq IPO last November, which valued the company at $7bn. The Ozon valuation has led analysts to estimate Wildberries, in comparison, to be worth approximately $13bn (Forbes), making it one of the most valuable internet companies in Russia.

Wildberries is the latest example of a phenomenally successful frontier markets innovator expanding outside their home market and successfully competing in both developed and emerging markets. The company’s success is a testament to the technical talent and infrastructure now available across Frontier markets. What is even more remarkable is that the company has never raised external capital in its rise to dominate the ecommerce market in Russia.

What opportunity set does Wildberries target? 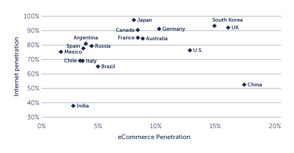 Wildberries is a beneficiary of ecommerce’s nascency and continued fragmentation in Frontier markets. No single company has yet come close to dominating ecommerce in Wildberries’ countries of operation – as the number 1 player; they have still only captured a 15% market share. Wildberries is thriving in this fragmented landscape – irrespective of Covid – with 2020 sales surpassing $6bn, a 74% increase year-on-year. Unique users were also up 90% in 2020.

Wildberries’ core market, Russia, has over 145m people and an ecommerce penetration rate below 5% of total retail sales. Despite having a significant domestic market to tackle, Wildberries has already expanded outside Russia to other former soviet countries and beyond, representing nearly 370m people: Belarus, Kazakhstan, Kyrgyzstan, Armenia, Poland, Slovakia, Ukraine, Israel and now Germany. Plans are already in place to expand into France, Italy, and Spain, representing an additional market of 174m people.

Much like Jumia, which we covered in our previous newsletter, and Sturgeon’s own portfolio company Zoodmall, Wildberries overcame issues related to logistics, payments, and customer service to succeed. Unlike Jumia and Zoodmall, which employ a capital-light marketplace model, Wildberries has pursued an inventory-model – in other words, a business model more similar to Amazon than AliExpress.

As we frequently mention, in frontier markets, incumbent offline financial institutions are fragmented and extremely poor at customer acquisition. Frontier innovators like Wildberries are, by their very nature, embedded in their users’ lives, providing the data and captive customer-base required to offer financial services. Wildberries is no exception and has partnered with various banks to offer express loans to suppliers and consumer credit to customers.

Wildberries was founded by Tatyana Bakalchuk in 2004 when on maternity leave in Moscow. The idea was sparked when she realised how hard it was to shop for clothes when homebound with a baby. Tatyana started by purchasing clothes from German retailers Otto and Quelle to resell, often delivering the orders herself. The product range grew quickly to incorporate household appliances, cosmetics, and toys. At the time, the Russian online retail market was only worth $3.2bn (<1% total retail) and was comprised of about 1,500 small sellers. By 2005, Tatyana had launched a website and placed ads on women’s forums and hired a few staff. Having initially used her flat as a small warehouse, she began renting ever-increasing warehouse space and liaised with several couriers to deliver products. In 2006, her German supplier Otto chose a different partner to distribute their clothes in Russia, forcing Tatyana to expand her brand offering, acting as a real catalyst for Wildberries’ growth. As with many frontier markets, logistics was a significant hindrance to Wildberries’ early growth, with Russia lacking the required infrastructure: long distances, poor roads, and unreliable postal service. In response, Wildberries introduced free partner pick-up points and branded collection points with fitting rooms and the ability to return items (>7,000 now established in heavily populated areas of Russia). Wildberries established its own logistics department and now has 13 warehouses and a large fleet of lorries and vans.

As detailed in Alexandre Lazarow’s book ‘out-innovate’, many frontier markets lack a deep pool of funding and are forced to bootstrap the enterprise. This was also true for Wildberries, which was in solid financial shape heading into the 2008 financial crisis. Wildberries’ lack of leverage allowed them to obtain credit to buy large, discounted goods that large retailers could not sell. For example, Wildberries bought €1m worth of Adidas trainers on credit which the company sold over the following two years. The company still has no external shareholders and remains 100% owned by Tatyana.

By 2020, Wildberries had 4m products from 26,000 suppliers (45% are Russian). The company has added additional services such as groceries, but around 60% of its turnover is still clothing-related. Russian competition has evolved in recent years, with Yandex setting up a $1bn joint venture with state-owned Sberbank in 2018. In 2019, Mail.ru, the tech conglomerate that is Yandex’s biggest competitor, announced a joint venture with Alibaba. Before IPO, Ozon also secured significant new investment from Russian and US investors during the pandemic. Despite this competition, nobody has significantly cut Wildberries market share, where total sales are still as much as its three closest competitors combined.