Why has Udaan been in the news?

At the very end of 2020, Udaan raised $280.5 million of Series D venture funding from Octahedron Capital, Moonstone Capital, and Lightspeed Venture Partners, putting the company’s pre-money valuation at $2.72 billion. The fundraise was an extension of the $585 million Series D round from Tencent Holdings, Citi Ventures and Hillhouse Capital Group in October 2019, and brought the total amount of capital raised by the business to $1.15 billion. Udaan holds the record for being the fastest start-up to reach unicorn valuation in India.

It has not all been plain sailing. Having reached an annualised Gross Merchandise Value (GMV) of $2 billion in October 2019, the pandemic-enforced shutdown led GMV to fall by over 70% in April 2020, and the company laid off an estimated 10-15% (3-3,500) of its contractual staff. Since then, GMV has recovered to $2.4 billion annualised in January 2021, and the company claims that margins have improved. However, questions remain about the monetisation of its business model, which so far has focused on aggressively acquiring clients at the expense of profitability. And competition from Walmart-backed Flipkart Wholesale, Metro, Reliance Retail’s Jiomart, Amazon Business and other technology start-ups is increasing.

What opportunity set does Udaan target?

Much like other frontier markets, the retail sector in India is dominated by small retailers, locally known as kirana stores. There are an estimated 15 million small and mid-sized retailers that power close to 85% of the country’s retail sales. Modern wholesalers such as Germany’s Metro AG, Walmart-owned Best Price, Reliance Retail’s cash-and-carry outlets called Reliance Market and others account for up to 10% of India’s overall wholesale market in some cities. The figure for FMCG products in the whole of the country is less, around 3-4% of the total.

The opportunity is huge. India’s retail industry is expected to be worth $1.1 trillion in 2021, and the wholesale market in food and grocery alone is about $600 billion. It is the size of this opportunity that has attracted technology companies to try and solve the inefficiencies that plague the market. B2B marketplaces have historically struggled due to the complexity and size of B2B transactions and the slow pace of technological adoption among retailers. This has changed in recent years, with the proliferation of the internet (especially on mobile phones), increased familiarity with ecommerce and greater acceptance of digital payments opening up the opportunity for technology companies to integrate into the transaction flow. The Covid-19 pandemic has only reinforced these trends.

What is Udaan today? 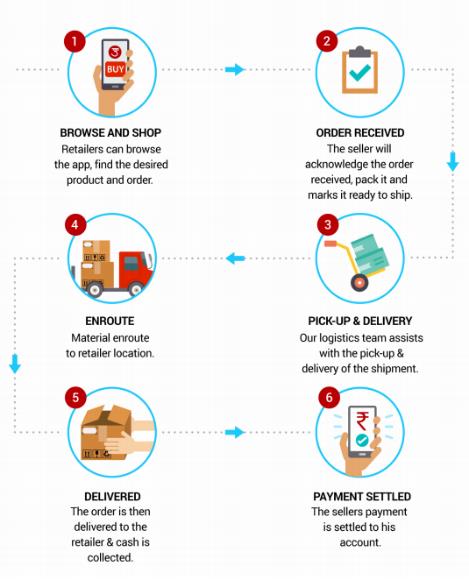 Co-founded by three former Flipkart executives, Udaan solves the inefficiencies that afflict the mass retail market. The platform helps traders, wholesalers, retailers, and manufacturers to connect directly with each other in a single place for better deals. It also facilitates buying and selling with secure payments and smooth logistics, enabling retailers and businesses to source merchandise from manufacturers, brands, white labels, and importers on a single platform. Today the company serves 3 million retailers, with 25,000 suppliers across 900 cities. It has signed up thousands of brands, including Coca-Cola, PepsiCo, Boat Lifestyle, Micromax, HP, LG, ITC, HUL and P&G.

Other than the inventory problem, Udaan also helps merchants secure working capital quickly and hassle-free. Small businesses, especially kirana stores, rely on the money they secure from selling their existing inventory for buying their next batch. As with other frontier markets, they also sell a high percentage of their products on credit, which puts a greater squeeze on their working capital. Estimates by Bank of America indicate that the unaddressed SME credit demand in India is ~$300-350 billion, which presents a massive potential opportunity for firms such as Udaan. Udaan has received a non-banking financial company (NBFC) license to provide working capital loans off its own balance sheet, as well as working with other capital providers.

Udaan acquired these customers by offering low or no commission fees, subsidies on logistics services, helping them make and collect payments, providing them with customer support, and offering trade finance. This unsurprisingly led to rapid customer growth at a high cash burn rate. The company’s parent entity saw its revenue increase from Rs 3.24 crore (US$423,644) in the year ended March 2018 to Rs 46.36 crore (US$6.1 million) for the following year. Its total losses, though, widened from Rs 60.3 crore (~US$8 million) to Rs 779.5 crore (US$103.2 million) in the same period.

The company’s monetisation model is based on a commission fee charged to sellers, a flat fee it charges buyers for logistics, interest on lending, and value-added services like banner ads. Despite the rapid customer growth, reports in India have suggested that the company has struggled to implement this strategy effectively.* When it introduced commissions, sellers allegedly either left the platform or passed it onto buyers, who got hit with the double whammy of paying delivery fees as well. Udaan handles 65% of logistics internally, through Udaan Express, and bears the cost of returns and handling cash on delivery. The company also reportedly has issues with poor customer service and high credit defaults. These struggles are symptomatic of the challenge B2B marketplaces face in translating the size of the opportunity into a sustainable business. 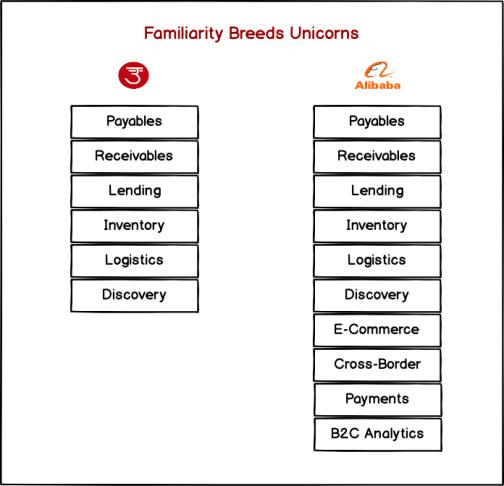 Udaan’s troubles don’t stop there. Its two most popular categories, food and FMCG, which also generate the highest average order value (AOV), are where it faces the highest level of competition. JioMart, the grocery service arm of India’s most valuable company Reliance Industries, has tapped into kiranas. Flipkart Wholesale, backed by Walmart, launched in September 2020, also focuses on the B2B segment. Amazon is also ramping up its grocery play, while there is plenty of VC-funded competition through the likes of agritech start-up Ninjacart and B2B groceries start-up Jumbotail.

The reward for Udaan if it can overcome its internal and external challenges and capture a dominant share in the B2B market would more than outweigh the investments to date. In many ways, the Indian economy is not dissimilar to China, and there is an opportunity for Udaan to establish an ecosystem not unlike Alibaba’s**. Through the services it provides, the company has become a force for empowerment of the millions of small shops that are the backbone of India’s retail sector. Whether it can translate that into a profitable business model, and how much it will cost investors to do so, remains to be seen.