Why has Swvl been in the news?

In July 2021, Swvl announced that it would go public via a merger with Special Purpose Acquisition Vehicle (SPAC) Queen’s Gambit Growth Capital on NASDAQ, at a post-money valuation of $1.5bn(1). Seeded with $500k by Careem in 2017, the company then raised over $100m in funding from investors including Vostok New Ventures Global, Beco Capital, Raed Ventures, Sawari Ventures, MSA Capital, Silicon Badia, and Oman Technology Fund. There is potential for strategic and operational collaborations with key investors, one of which is Agility, a global supply chain and logistics powerhouse, and another called Zain, a leading mobile voice and data services operator with nearly 50 million customers across many of Swvl’s current markets. It is the first Egyptian start-up to go public outside of Egypt, and it will be the largest African unicorn debut on any US-listed exchange, beating Jumia’s debut of $1.1bn on the NYSE (covered in a previous Sturgeon blog(2)).

Since the SPAC merger notice, Swvl has been in the news again in August 2021 with the announcement that it would acquire Barcelona-based Shotl, an Uber-like service for bus and van operators that caters to municipalities, corporations, and educational institutions. With more than 350,000 bookings till date, the Shotl platform helps transport operators and cities make better use of bus systems by replacing low-ridership routes with on-demand shuttles. The acquisition of Shotl accelerates Swvl’s European expansion plans by a year, and more than doubles Swvl’s geographic footprint with the addition of 22 cities across 10 countries, taking the total Swvl portfolio to 32 cities in 16 countries. It also provides entry into Brazil, more than 6 months ahead of schedule, with a roadmap to complement Shotl’s SaaS existing offering with a full consumer offering. The deal is also an entry point into autonomous driving projects, primarily through Shotl’s participation in a project led by the European Commission to demonstrate the impact of self-driving minibuses on future public transport networks.

What opportunity set does Swvl target?

Swvl is targeting the $1 trillion global mass transit market. The company’s proprietary mobility solutions are helping to solve mass transit supply and demand challenges in complex, emerging markets – empowering underserved communities with transportation solutions that are reliable, convenient, safe, and affordable. Through its solution, the company claims to be able to provide passengers with 40% cheaper fares than traditional transportation options while increasing driver earnings 2x through higher utilisation rates. The company’s Transport as a Service (“TaaS”) offerings for businesses, schools, universities, and other critical service organizations allow them to optimise and better utilise their own and outsourced transportation options, reducing costs and increasing efficiency while providing a better quality of service. 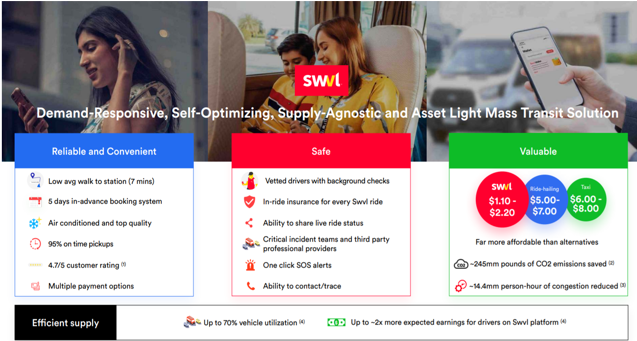 Following the announcement of its SPAC merger, Mostafa Kandil, Swvl Founder and CEO, said the following: “Mass transit systems in cities around the world are riddled with deficiencies, resulting in congestion, environmental concerns and reduced productivity. In certain emerging market cities, commuter round-trip wait times are often greater than 40 minutes and, in one major city, upwards of 80% of women reported that they have experienced harassment on public transport. To address these problems, we founded Swvl with a simple but ambitious goal – to empower all people to go where they want to, when they want to, and to feel comfortable doing it.“

Swvl today is a mass transit system that offers intercity, intracity, B2B and business-to-government transportation in parallel across 10 major cities in 6 countries. It was founded by Mostafa Kandil, Mahmoud Nouh, and Ahmed Sabbah in 2017. The trio started the company as a bus-hailing service in Egypt and included other ride-sharing services in emerging markets with fragmented public transportation. After its Egypt launch, Swvl expanded to Kenya, Pakistan, Jordan, and Saudi Arabia. In its primary markets, Egypt, Kenya, and Pakistan, Swvl serves both consumers and businesses through Daily, Travel, and Business offerings. In some of the new markets like Jordan and Saudi, where Swvl launched recently, it is only serving businesses through its TaaS offering.

Swvl’s gross revenue and markets have grown rapidly, with more than 1.4 million riders booking more than 46 million rides to date with thousands of drivers on Swvl’s platform. With its TaaS offerings, Swvl has already enabled more than 100 organizations around the world. Swvl’s user base of consumers and corporates is loyal, with +20% of inter-city riders opting to use multiple platform offerings with 60% and 115% annual gross revenue retention for the consumer and business segments respectively. The company is forecasting gross revenues of $79m in 2021, up from $26m in 2020. Current gross margins are 20% and the company is not yet profitable, but it is targeting +40% gross margin through supply focused interventions (e.g., bidding, dynamic routing) and 15% EBITDA profitability over the long-term. The company’s strategic plan and objective is to achieve ~$1bn in annual gross revenue and be operating in 20 countries on 5 continents (Africa, South America, North America, Europe & Asia) by 2025.