Jumia: The challenges and opportunities facing the African ecommerce giant

Why has Jumia been in the news?

In April 2019, Jumia was listed on the New York Stock Exchange, becoming the first African start-up to IPO on a major international exchange. Initially valued at $1.4 billion, by the end of the first day’s trading the company’s value had soared to over $3 billion. Within a few weeks, however, the company’s stock suffered a significant decline, weighed down by allegations of fraud and concealed losses. Just before the anniversary of its IPO, founding investor, Rocket Internet, sold their 11% stake for around $4 per share.

Since the initial turbulence following its IPO, Jumia has refocused on core efficiency and profitability in order to develop a more sustainable business for the long-term. It has exited 14 countries and shifted its product catalogue to a higher turnover and margin products. With the Covid-19 crisis rapidly accelerating retail’s shift to digital, globally, and with a renewed focus on profitability, there is a compelling case to review Jumia in a new light. Its share price has certainly reflected changing perceptions of the business, rising to $28 per share at the time of writing (market cap $2.3 billion). The nascent stage of e-commerce in Africa means there are still many opportunities for Jumia to grow, both in terms of its core marketplace and also its payments and logistics as part of a holistic platform.

What opportunity set does Jumia target?

With a population of 1.3 billion, a growing middle class, high GDP growth and high internet and smartphone (77%) penetration, the opportunity for e-commerce in Africa is large. Despite this, there remain fundamental challenges, including poor infrastructure, a lack of locally manufactured goods, and economic instability, that e-commerce players must overcome in order to succeed. These challenges help to explain why the e-commerce market is still so underdeveloped, with penetration less than 1%. However, the development of a core digital infrastructure across the continent has created opportunities for e-commerce players to solve these challenges and meet the needs of consumers, much as Jumia has done.

Unlike developed markets where fierce e-commerce competition relies on existing quality infrastructure, in frontier markets such as Africa the responsibility for creating the necessary infrastructure falls on the e-commerce challenger. Once developed, this infrastructure can then become a key point of competitive advantage for the incumbent e-commerce player. To be successful, Jumia had to solve three fundamental problems: 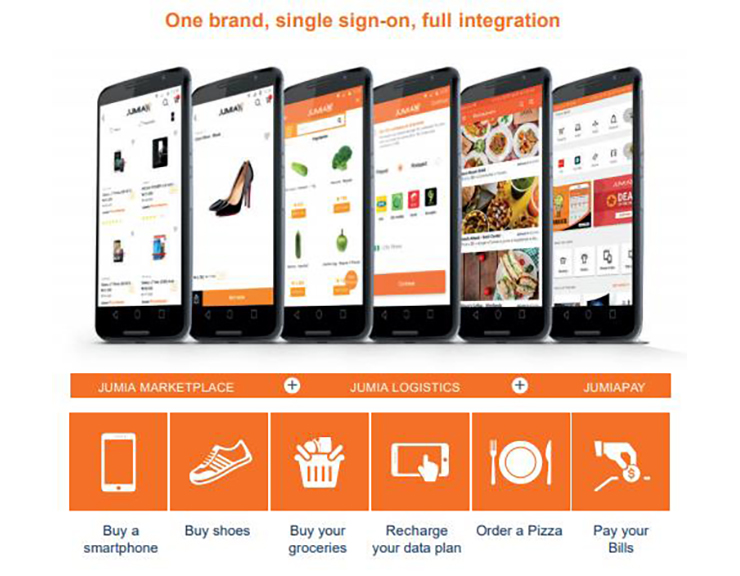 When Jumia launched in 2012, backed by Rocket Internet (a European VC), it aspired to become the dominant e-commerce player in Africa. The company initially implemented a business model where it held its own inventory. This inherently has greater capital requirements, but it allowed the company to maintain a certain degree of product and service quality. Despite strong initial growth, an economic downturn and heightened inventory risk led to the decision in 2016 to pivot the business model to that of a capital-light marketplace. Sellers became responsible for inventory, and Jumia was able to focus on marketing, customer service, logistics, tech, and products. As with Sturgeon’s portfolio company, Zoodmall, the Jumia team had to solve complex local issues related to delivery, payments (including cash on delivery) and products.

The Jumia platform today consists of its marketplace, which connects sellers with consumers, its logistics service (Jumia Logistics Services), which enables the shipment and delivery of packages from sellers to consumers, and its payment service (JumiaPay), which facilitates transactions among participants active on the platform in selected markets.

Having pulled back and refocused on core profitability, in Q3 2020 the company has – for the first time at group level – achieved a positive gross profit with the majority of countries breaking even. The rebalancing of the business initiated at the end of 2019 has increased Jumia’s exposure to faster-selling items and reduced advertising spending, supporting unit economics. Jumia has also begun using its logistics dominance to act as a platform company for deliveries, similar to a company like GrubHub. Operating losses reached a three-year low of €28.0 million, decreasing by 49% year-over-year. With the Covid-19 catalyst increasing demand for e-commerce across Africa, Jumia is still early on its growth journey and now may be its moment to deliver on the promise that many investors saw at IPO.