Why has GoTo been in the news?

In May 2021, Gojek and Tokopedia, Indonesia’s two biggest start-ups, announced that they have agreed to a merger that will create an $18bn food delivery, ride-hailing, and e-commerce group with reach across Southeast Asia. According to the companies, the valuation was based on past funding rounds in 2019 and 2020. The merged company, which will be renamed GoTo, is said to be seeking $2bn in pre-IPO funding and will target a public market valuation of up to $40bn through a dual listing in Indonesia and the US later this year. The two companies existing investors are something of a roll call of leading international companies, VCs, and PE firms, including Alibaba Group, BlackRock, Facebook, PayPal, Google, JD.com, KKR, Sequoia Capital India, SoftBank Vision Fund 1, Temasek, Tencent, Visa and Warburg Pincus.

This is the latest headline story from a region that is growing rapidly. In 2020, Gojek had been in discussions to merge with Grab, Southeast Asia’s largest ride hailing and food delivery firm, until talks fell through in December. Since then, Grab clinched a $40 billion merger with a special purpose acquisition company, the largest ever, from which the company will receive $4bn in capital. 2020 also saw the rapid growth of e-commerce platform Shopee, which is entering into food delivery and financial services, and whose US-listed parent company Sea Ltd share price increased nearly 400% in 2020 to a market value of more than $100bn.

What opportunity set does GoTo target? 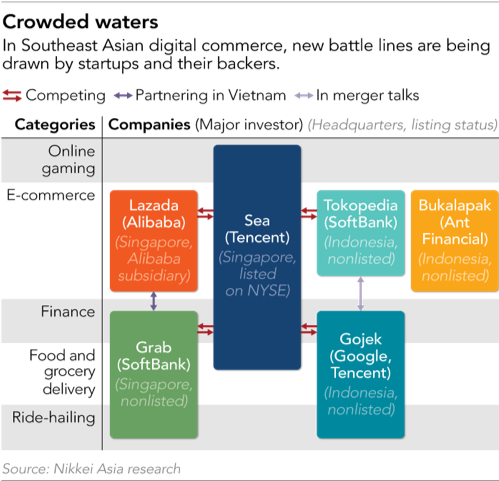 Both Gojek and Tokopedia’s primary operations are in Indonesia, which has a GDP of more than $1tn and is the fourth most populous country in the world with a total population of 270 million (out of 650m in Southeast Asia). The GoTo Group will hope to tap into the economic growth potential in Indonesia through the fast-growing middle-class segment and a young highly tech-savvy population. The e-commerce market is booming in the country, with the digital economy expected to grow to $124 billion by 2025, according to a 2020 study by Google, Temasek Holdings and Bain & Company.

The size of the opportunity in Indonesia and Southeast Asia is matched by the level of well-funded competition. By merging to form GoTo, Gojek and Tokopedia will be hoping better compete with Grab and Sea as all three companies look to become the leading regional super app. With operations in eight countries and over 400 cities, Grab is Southeast Asia’s most valuable start-up. Leveraging its ride-hailing business, it has moved into food and grocery deliveries, courier services, digital payments, and is making a push into insurance and lending. Concurrently, Shopee has become the country’s most visited e-commerce platform, according to digital research firm iPrice, and ShopeePay is now the most used digital payments service, according to Ipsos Indonesia.

83 million people in Indonesia still don’t have access to financial services, and so a significant opportunity for these companies lies in leveraging their existing user bases and the extensive data they hold on them to provide financial services. Gojek provides a wide range of financial services based on its mobile wallet, Gopay, including insurance, buy now pay later, bill payments and more. Capturing the financial transactions of its users is both an important competitive moat but also a major source of revenue generation. In 2020, Gojek spent US$160 million to increase its stake in PT Bank Jago to 22% from 4%, with plans to transform it into a digital bank. This came not long after Grab lead a US$100 million funding round in Indonesian e-wallet LinkAja, and Sea purchased PT Bank Kesejahteraan Ekonomi this year. Both Grab and Sea won digital bank licences in Singapore last year.

Gojek was founded in 2010 as a call centre to optimize the service of motorcycle taxis (ojeks) in Indonesia. The Gojek app was launched in Indonesia in January 2015, offering motorbike ride-hailing (GoRide), courier (GoSend), and personal shopping (GoMart) services. Today, Gojek has transformed into a super app: a one-stop platform with more than 20 services, connecting over 170 million users across the region with over 2 million driver-partners and 500,000 GoFood merchants, and has scaled the business across five countries in Southeast Asia.

Tokopedia is a digital marketplace that brings e-commerce opportunities to small and mid-size businesses. Tokopedia – “toko” means shop in Bahasa – empowers millions of sellers and users through marketplaces and digital products, fintech and payments, logistics and fulfilment. Today, it connects more than 9 million Indonesian merchants and serves more than 100 million monthly active users. It provides access to a wide variety of goods and services in 98% of the districts across more than 17,000 islands in Indonesia.

Combined the GoTo group has:

Using the model of Alphabet, Gojek and Tokopedia plan to remain separate but work together on payments, logistics and food deliveries. Gojek’s Andre Soelistyo will lead the combined business as GoTo Group CEO, with Tokopedia’s Patrick Cao serving as GoTo Group President. “GoTo will be unique in its ability to cover two-thirds of Indonesian consumer expenditure,” Cao told reporters. “If you look at our regional peers, they exceed only at covering one sector. We have Gojek’s high-volume, high-frequency mobility transactions, combined with Tokopedia’s high-value, medium-frequency ecommerce transactions.”